What is a network TAP?

A network TAP (short for Test Access Point) is a device placed on a network segment that allows you to access and monitor network traffic. Network Taps allow traffic to flow without interruption or interference. As long as they are connected, a network tap creates an exact copy of two-way traffic on the network. All monitoring and analysis tools connected to the tap receive exact copies of the network traffic.

How does a network TAP work?

A network TAP is inserted between two network segments. For example, a network TAP can connect two devices (such as a switch and router) by inserting it "in-line" between the switch and router. This deployment is often referred to as "out of band". Data continues to flow uninterrupted between the two network devices in both directions, as it normally would. A network tap copies the transmit signals from each device and sends them to separate monitoring ports. This way, every packet is copied, and monitoring and analysis tools can see 100% full-duplex traffic without the risk of being overloaded. Network traffic is not affected, and there is no additional load on the network. 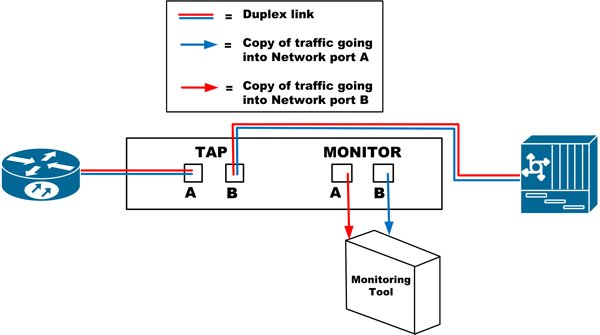 Why use a network TAP?

Network Taps are a cost-effective and highly reliable way to deliver data non-intrusively to Network Tools. They provide a secure 24/7 access point for monitoring and analysis. And unlike many in-line monitoring devices, taps are fail-safe and do not represent a single point of failure.

Because network taps connect between network segments, they allow you to instantly connect troubleshooting and analysis tools to that segment without network disruption or the use of service windows.

They allow you to retain the use of ports on network switches that are frequently used for analysis purposes. In addition, Taps provide 100% visibility into all seven layers of network traffic. They can be used to make physical layer traffic available to other aggregation devices to supplement SPAN or port mirror collection for enhanced analysis.

By selecting "Accept all", you give us permission to use the following services on our website: YouTube, Vimeo, ReCaptcha, Google Analytics 4, Google Analytics (Universal Analytics), Google Ads Conversion Tracking. You can change the settings at any time (fingerprint icon in the bottom left corner). For further details, please see Individual configuration and our Privacy notice.

The settings you specify here are stored in the "local storage" of your device. The settings will be remembered for the next time you visit our online shop. You can change these settings at any time (fingerprint icon in the bottom left corner).

To view Vimeo contents on this website, you need to consent to the transfer of data and storage of third-party cookies by Vimeo.. This allows us to improve your user experience and to make our website better and more interesting. Without your consent, no data will be transferred to Vimeo. However, you will also not be able to use the Vimdeo services on this website.

To submit forms on this page, you need to consent to the transfer of data and storage of third-party cookies by Google. With your consent, reCAPTCHA, a Google service to avoid spam messages via contact forms, will be embedded. This service allows us to provide our customers with a safe way to contact us via online forms. At the same time, the service prevents spam bots from compromising our services. After you gave your permission, you might be asked to answer a security prompt to send the form. If you do not consent, unfortunately you cannot use the form. Please contact us in a different way.

Would you like to see these contents? Activate the desired contents for one session only or allow the website to remember these settings. Once you have given your consent, the third-party data can be loaded. For this, third-party cookies might be stored on your device. You can change these settings at any time (fingerprint icon in the bottom left corner). For further details, please see the Privacy notice.

Too bad, now we have to go back to the glass ball or read in the coffee grounds to understand our visitors ...

Why do we have to do that? Quite simply, you have forbidden us to watch Your steps on our site with Google Analytics. That sounds dramatically to You, we know. But look at it: we do not even know who YOU are, we just see that SOMEONE looks at our pages, how he/she does that, how long this SOMEONE lingers on the respective pages, etc. We do not know who You are, whether You are male or female, how old You are, how Your weight is - no idea. Nor do we pass this data on to Google, we don not have them not at all! Nevertheless, this data of SOMEONE will provide us with valuable information about our site, we want You to like everything here, that You feel good and - of course - buy our products ...

So we can see where there are problems. If many visitors leave our site during the purchase process while choosing the payment method, we know that something is wrong and can improve it. Sounds good, right? Thats good for You and good for us. So it´s a win-win situation. So let us accompany You on Your way through our store. Deal?

Great, you got it! Now we can work better on our offer again!